G:      Oh, no. The only sports we played was at recess. We'd go out and play softball. We had to make our own balls by wrappin' and makin' ‘em out of twine. And we's very careful not to loose them though. We watched where they went and when one hit off under the hill we'd go look ‘em up.

G:      Oh, my hobbies is huntin' and fishin' -pause- farmin' raisin' the cattle. I've lived on a farm here all of our lives and I enjoy fishin' 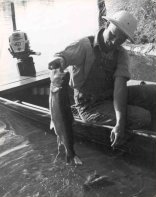 G:      Favorite fishing story - laugh - I guess the one that got away, the big one. I was fishin', I was a guide on White River for Hurst Fishing Service for several years and I was a fishin' along one day and, of course, I hooked this big rainbow trout, looked like he'd probably weighed 10 or 12 pounds. I got him up to the boat and I was excited and the fishermen was excited. The fella in the middle of the boat was goina dip him out with a net, dip him up out of the water, and he reached down and got the fish up on the net, and the net (pause) the fish fell off of it and he (pause) got away, swam off. That's a true story.

A:      What's your favorite hunting story that your father ever told you?

G:      Oh, when I was a little boy, he used to tell me about turkey hunting, and we didn't have turkey's around here at that time, and he would tell about him and his brother and a fella that worked for ‘em. They had been huntin' this old gobbler all spring and ah, he told me he killed the old turkey and then later on, he didn't let them know it but he told them, they was later, they was a wonderin' what where this old turkey went, they quit hearin' him gobble, and one day they was a workin' in he field and they made that remark, wonderin' what happened to their old turkey and he said, well says, "I don't think you'll ever hear him anymore, he had about an 11 inch beard.

G:      Oh, one of my favorite huntin' buddies, I've got several, but Elmo Hurst. He's my cousin. We used to go to Colorado and hunt all the time. And ah, he was the kinda guy who was enthusiastic in camp, and he a enjoyed our stories and sitting around the fire after we'd been out hunting all day, and he was always a real nice guy and helped you if you needed any help, if you was a lucky enough to kill something, and we just had a great time out huntin' in Colorado and so he's one of my favorites.


A:      When you were a kid did you ever go somewhere you weren't supposed to and something bad happen?

G:      Well, one time I remember, I was about 12 years old, and I went down to the river, and it was an early spring, and I had bought me a new fishing rod and reel that winter, and ah, it, the river, was cold and I was just too cold to get in the river so I was just wadin' around on the rocks, and ah, I got finished fishin' and I decided to go to the home, and I made a jump from one rock to another and I slipped and hit my knee on that rock and it busted my knee cap, and I was dreaden to tell my dad what happened, but it all worked out okay. I was kindly stiff for a few months, with my knee, but It got okay.


A:      What was the worst natural disaster that you ever remember happening?

G:      Oh, we used to have ah, floods though before the dam was built, and the water would come up over, in the spring of the year, would come up over the field and wash our crops away, and leave a lot of debris and logs and stuff in the field, and that was probably one of the worst things that happened, in my time other than storms and tornadoes and things that happened.

A:      What about snow storms? What was the deepest snow that you remember happening?

Snow Storm
G:      I guess the biggest snow storm I can remember, Sue and I went to a Mar-BaxChristmas party over at Mountain Home one night. It started snowing, and it snowed so hard we wasn't able to get home, and we had to stay the night in Cotter that night. The next day we was able to get over to her aunt and uncle's at Yellville, and it was probably about a 20 inch snow. But ah, that was 3 or 4 days before Christmas and it was after Christmas before we was able to get home.

A:      What about your first new car? What kinda car was it and how much did it cost?

G:      Yeah, the first T.V. we had was after Sue and I married, in about 19 and 55 or 19 and 56 somewhere along there. We got electricity down in this area and we bought a little black and white T.V. and we'd sit there and watch it, watch it snow mostly. -laugh- We could see a picture now and then but we'd see more snow than anything

Hangout
A:      Was there any certain spot you used to hang out at when you were a teenager?

G:      Oh, when I was a teenager, I'd drive out to Flippin on Saturday nights and we'd go to the movie and after the movie was over we'd go down to the pool hall, played pool, most of us teenage boys would, if we didn't have a date.