In 1996, local citizens of Bull Shoals had made complaints about how the park was not a very bright place and some parents did not want to take their children there. They did not view the park as safe. Mayor Thompson wanted to beautify and improve the Bull Shoals City Park. For three years, the city removed underbrush, cleared out trees, and proceeded to clean the park. In 1996, a Citizen's Committee first had the idea of constructing a hiking trail. In the third year of the park's clean-up, Mayor Thompson decided to try to add a new trail between the City Park and the new Visitor Information Center at the Overlook at the Bull Shoals Dam which will be completed in 2003. This would be the first handicapped accessible trail in the state of Arkansas. In order to apply for the grant, he needed Geo referenced maps of the trail proving that it stayed within a five degree incline. Mayor Thompson became aware of our EAST Lab after we held an Open House in March of 2002. He contacted our EAST Lab in late March for our assistance in mapping the park and trail for the grant application. The Flippin EAST Lab GPS Team felt this would be a good project for the Flippin EAST Lab so they agreed to meet with the mayor. Ms. Wade, Mark, and Mike met with Mayor Thompson after school at the Bull Shoals City Hall with the lab's GPS rovers in hand. From there, Mayor Thompson took them to the park and he proceeded to walk the trail route with them. Mike and Mark mapped the entire trail using the Lab's GeoExplorer III rovers. They then returned to The Flippin EAST Lab and transferred all the data to computers. The next day, they differentially corrected and cleaned the trail data. Over the next few days, they mapped several of the surrounding streets and the park perimeter. They took the map of the proposed trail and few surrounding streets and compiled them into a map which is shown below. The Trail is blue while the roads are red.

Over the next few weeks, they continued to map the entire park and it's contents and compile everything in GeoMedia. They were finally able to organize the whole park into one map. 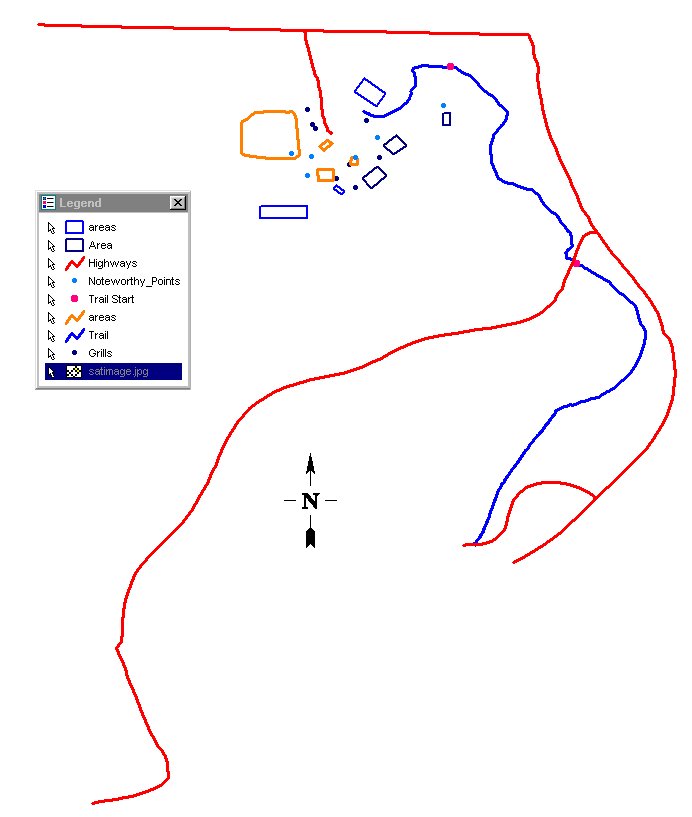 After they successfully finished this, they began hunting satellite images and maps to superimpose onto the map. They spent hours shaping images for the maps and came out with the finished project three days before the deadline. 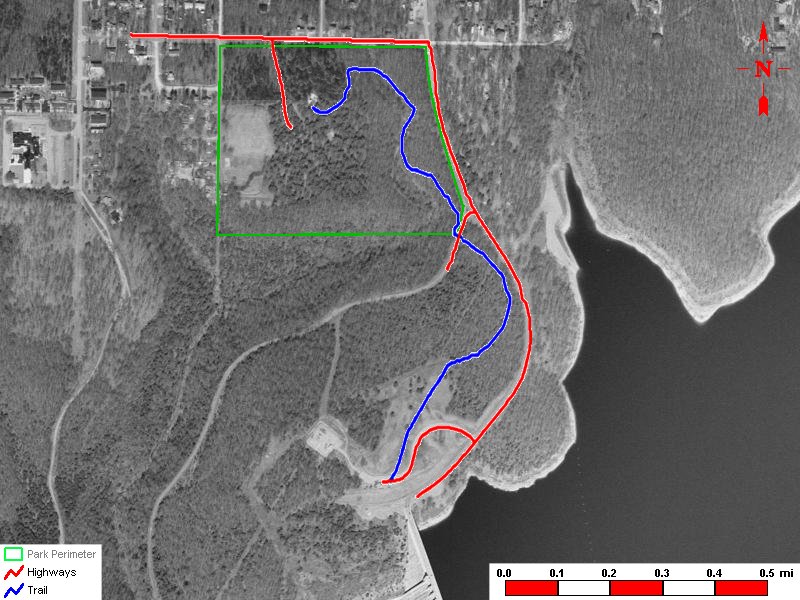 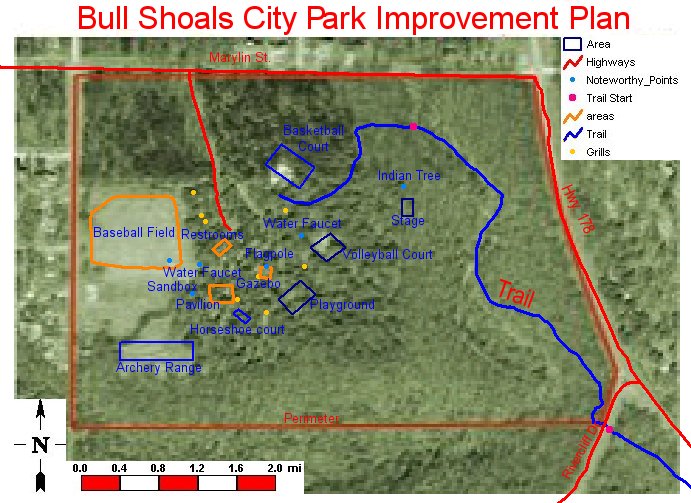 At the end of March of 2002, the city of Bull Shoals received the 2002 Distinguished Service Award for "demonstrating exceptional responsibility and stewardship through effective actions to preserve and protect the natural scenic beauty and quality environment of Arkansas." The Mayor invited Mark and Mike to the presentation of the award and he expressed his utmost gratitude for our assistance. The award presentation made the front page of the Mountaineer-Echo, Marion County's local newspaper.

The Mayor submitted the grant application along with The EAST Lab's maps in the spring of 2002. At the end of the summer of 2002, Mayor Thompson received word from the Arkansas department of Highway of Transportation that the $40,000.00 grant was approved.

If you would like to see the powerpoint presentation of the Bull Shoals City Mapping Project, click here.