As the early white settlers moved westward they used all kinds of methods of travel. Some walked, some came on horseback, others came in covered wagons pulled by oxen or horses. The picture to the right is a family after crossing White River on the Cotter Ferry on their journey west. They only took time to pose for this picture. I don't know their names or the date this picture was taken, but I can remember covered wagons going by all through the 1920's just like this one. 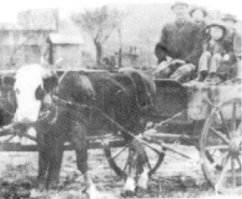 The picture to the left was taken in 1912 of an oxen team shown working pulling a wagon. This picture was furnished to me by Irvin (Dad) Horn. He told me he was in the spring seat with his grandfather John Colston. Standing behind the seat are his two brothers, Columbus at right and Claude at left. At the time they lived in Hogshin Hollow, just east of Summit. They were parked behind the Layton Building in Yellville getting some supplies. He remembered the steer's names were Ball (whiteface) and the other one was Rowdy. They worked and pulled as good as any mule team he had ever seen. As a boy Irvin plowed with them many a day. The only trouble he ever had with them was when old Ball got to getting too hot he would just lay down. As soon as he cooled off he was ready to go again. 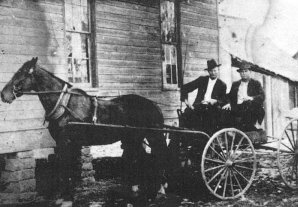 The picture to the right shows when travel got easier and faster. I was told this was a hack used to haul the mail from Yellville to Rush in the 1920's.

Reprinted with permission from Treasured Memories of a Beautiful Place in the North Arkansas Hills by Floyd Burleson, Copyright 1989.