The first schoolhouse was built in the late 1870's where the old, cobblestone schoolhouse is now located. People called this school Hudspeth School after Mr. Hudspeth who was the leader in building it. It was destroyed by fire and I don't have much information about it.

When this schoolhouse was built back it was located about a half mile east on the old Military Road (Highway 62 now). This new school was named after the Snow family that lived nearby as they played a big part in rebuilding it in the early 1880's. This school house was also destroyed by fire. When it was rebuilt it was moved back close to where the Hudspeth School was located and called Snow School. 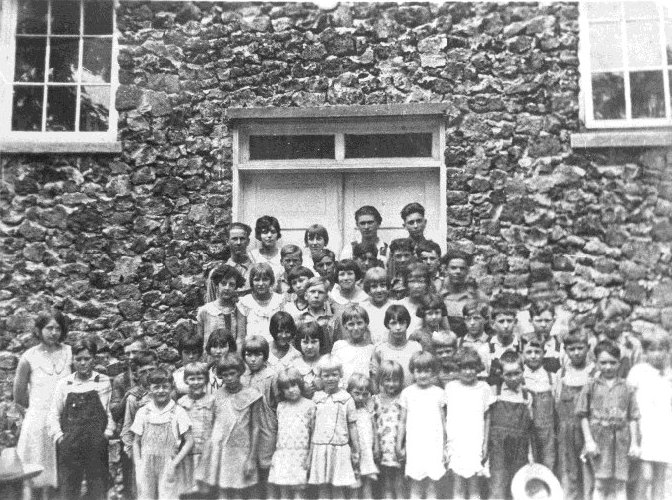 I attended this one room school from 1922 until it too burned in 1925, the same year it was replaced by a new, one room, cobblestone building. Keeping in step with the times, the windows were all located on one side of the building. In the early 1930's an additional room was added to accomodate the increasing number of students. Also another teacher was added, Mrs. Park (Thelma) Gaines was the teacher for the first through the fourth grades. Mr. Gaines was the teacher when the room was added on. He then taught 5th through 8th grades.

SOME OF THE SNOW SCHOOL TEACHERS OVER THE YEARS

J.W. Black, Ulis Firestone, Nellie Adams, Porter Waters, Ernest Black, Elzie Burleson, Carl Briggs, Euna Williams, Kirt Ledbetter, Carl Rose, Bob Keeter, Charlie Pierce, Nell Adams, Wynona Willingham, George Casey, Harvey Dodd, Fred Williams, Addie Campbell, Opel Hudspeth, Clarence Smith, Pharis Stovall, Ruth Wolf, Fred Gilbert, Park Gaines, Nellie Ketter, Orville Dodd, and Thelma (Campbell) Gaines. These are not in the order in which they taught. A few personal notes: Nell Adams married Hal Burns while teaching at Snow; Hal was teaching at George's Creek School at the time. Thelma Campbell married Park Gaines while he was teaching at Snow. In the early 1930's another room was added with Park teaching fifth through the eighth grades. Thelma taught the first through the fourth grade. They both taught longer than any other teachers. Nellie Keeter and Thelma Gaines were teaching up to the eighth grade when the Snow and Geroge's Creek Schools were consolidated with Yellville in 1949. The high schools from both schools had been bused for some time to Yellville and Pyatt.

When my father went to George's Creek School in the 1880's he used a Blue Back spelling book, a McGuffey's Reader, a Ray's arithmetic book and a slate to write on. When I went to school at Snow in the 1920's I used a Red Cedar pencil with a small eraser glued on the top end that cost a penny and a Big Chief tablet that cost five cents. The study courses were reading, spelling, arithmetic, history, geography, English, hygiene and writing. Most all the boys wore overalls and a shirt and the girls wore dresses. Almost everyone walked to school with some walking up to three miles and in the summertime most all were barefooted. Sometimes on Friday afternoons we would have a spelling bee or spell-down to see who was the best speller. A ciphering match was sometimes held to see who was the best in arithmetic by adding, subtracting and multiplying numbers. Not always would the ones in the higher grades win.

The school day would begin at 8:00 a.m. most of the time by singing a song or two, reading from the Bible or with a prayer. We had an hour for lunch with a fifteen minute recess in the morning and afternoon. School dismissed at 4:00 p.m. I am sure that recess time was the high time of the day, for most all children like to play. Some of the games we played were baseball, town ball, cross-out-ball, catchball, drop-the-handkerchief, tag, wolf-over-the-river, hopscotch, pop-the-whip, marbles and hide-and-seek.

In 1920 basketball came along and it became a favorite. Almost every small country school leveled off a dirt court and it soon became hard packed. After a rain the court became muddy and in the winter it would sometimes have snow or ice and be very slippery. However, that didn't always keep us from playing on it. A pole was placed in the ground at each end of the court with the backboard fastened to it. In some cases the goals were homemade by a blacksmith. In most cases the basketball was ordered from Sears. The first ones were called outdoor basketballs with the seams turned out. They were a fingernail getter and also harder to dribble at first. We had to walk over to a neighboring school and play them a game and walk back home. They in turn would come to our school. Both boys and girls had a lot of fun playing basketball at recess. Most schools didn't have a girl's team that played other schools. I was unable to obtain a picture of the basketball teams during that time.

When the lunch program started at the Snow School, Mrs. Flora Roark was the cook with Dila Billirigs as her helper. The last few years Mrs. Lillian Nowlin was the cook for the Snow and George's Creek Schools until they consolidated with the larger schools.

Miss Wynona Willingham was our teacher at the Snow School when I was a small boy. We had an hour at noon for lunch. There were a lot of walnut trees on the branch below the schoolhouses and after we had eaten our lunch we would go down and eat walnuts. Miss Willingham would go with us taking her old alarm clock with her so she would know what time to get back and take up books. One day some of the bigger boys got a chance to turn the time back on the clock she had sat down under one of the walnut trees. Mr. Cheek, a school director at the time, came along and asked why we weren't in school since it was after two o'clock. Boy did we take off to the schoolhouse. She never did find out what happened, she only thought there was something wrong with her clock. It was a long time before anyone ever told her the difference.

There were two other games we liked to play at the noon hour. The girls would make playhouses. They would sweep the ground then lay a row of rocks to make the exterior walls. Using rows of rocks to make interior walls divided the house into many rooms. Sometimes the girls would let the boys play house with them. The biggest boy would play the part of the father and the biggest girl would be the mother. The smaller boys and girls would play the part of the children. We would have lots of fun but this was mostly a girI's game.

The other game the boys liked to play was called fox and dogs. One or sometimes two would play the part of the fox. The rest of the boys would be the dogs or foxhounds. The fox, who was usually the fastest runner, would get a head start and the hounds would try and catch him. Sometimes the fox would get more than a head start and would drop small pieces of paper and the dogs would trail the fox and tree him. The dogs had to be good trailers. One day Ernest Estes and I were playing the part of the foxes. We put down a good trail of paper taking them south of the school on Crooked Creek to the Estes farm where we knew our way around. We stopped dropping the paper and headed back to school for we had to be back by one o'clock before books took up. The boys became lost and it took them most of the afternoon to find their way back to school. Ernest and I thought it was very funny to play a trick on them and they would get into trouble but we were the ones that almost got into trouble. The teacher told us if we ever did that again he would whip us. Back then he would have taken a switch and given us a good whipping.

Another game we sometimes played was called "tug of war". After marking off a line, we would choose up sides. One team would be on one side of the line with the other team on the opposite side. Both sides would get ahold of the rope with the winner being the team that could pull the lead boy or girl across the line first. Instead of a rope sometimes we used a grape vine.

Another favorite game was "drop the handkerchief". We played it by forming a large circle. One would be selected (A) to go around behind the ones in the circle and they would drop the handkerchief behind someone (B) that would pick it up and try to run after them and tag them. If B could tag A before A could get around to where B was standing and get in their place then A would have to drop the handkerchief again. The fun was to see how long we could keep one out of the circle.